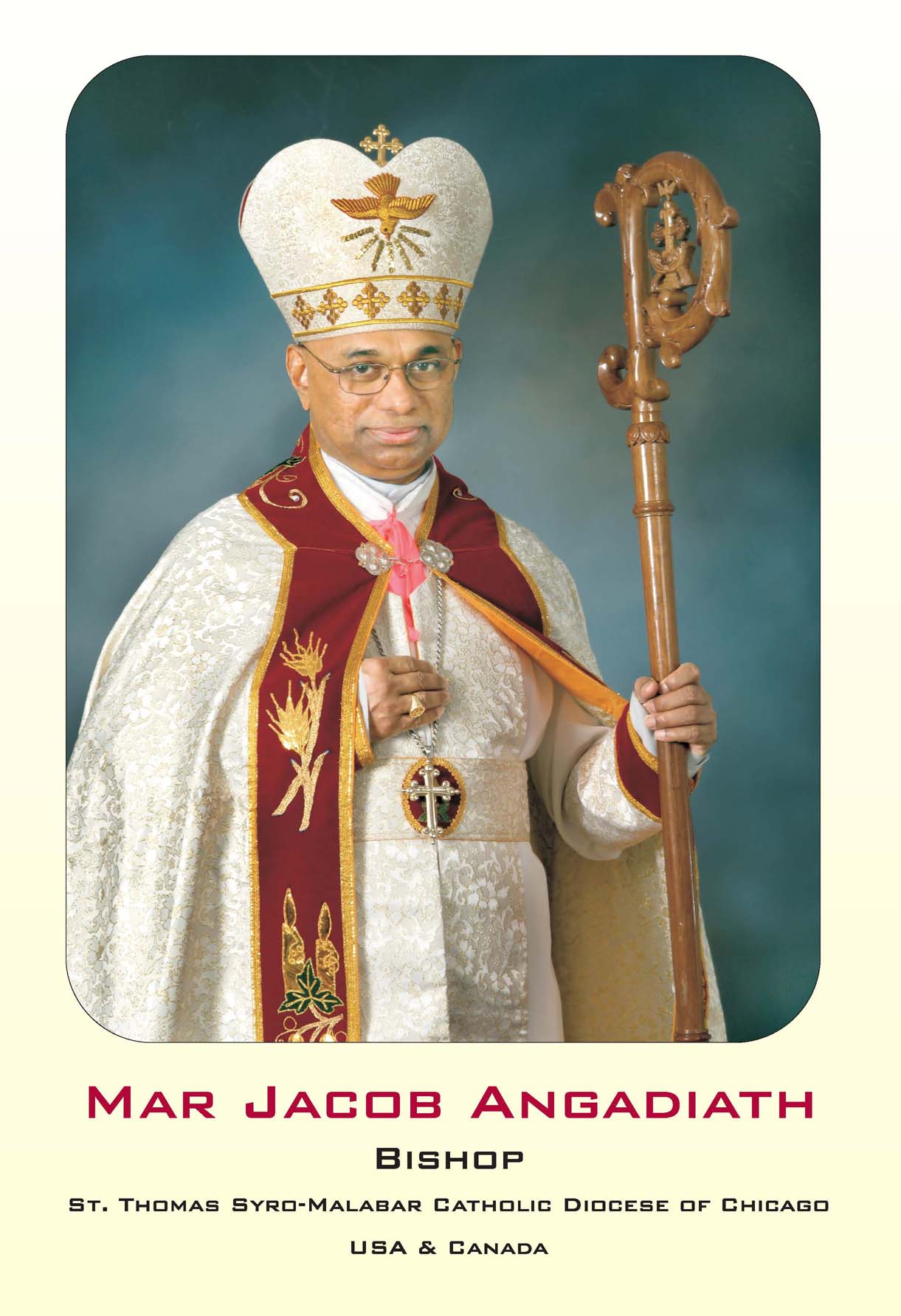 Mar Jacob Angadiath was born on October 26, 1945 at Periappuram in Elanji Panchayat of Ernakulam District, in the State of Kerala, India. His parents were Ulahannan and Mariam Angadiath and his mother was from Veluparampil family, Elanji. His home parish is St. John the Baptist Catholic Church, Periappuram, in the diocese of Palai. He has two brothers, A. Andrews Angadiath and A.U. Joseph Angadiath who are at Periappuram and one sister, Mrs. Aleykutty Augusthy Champamalayil at Matholapuram. His father died in 1948 and thereafter his mother and immediate family raised him.

St. Antony’s L.P. School, Kalluvettamada, Mulakulam was his first school were he received formal education for two years. Then he was transferred to Namakuzhy Government High School where he completed his high School in 1962. He was very active in literary practices of the school and catechism and Mission League activities of his parish.
He joined the Good Shepherd Minor Seminary, Palai to study for priesthood. He attended St. Thomas College, Palai, for Pre-university course and completed his Minor Seminary Program and joined the St. Thomas the Apostolic Seminary Vadavathoor. Kottayam, for his Philosophy and Theology courses in 1965. He had his Major Seminary formation under Very Rev. Msgr. Kurian Vanchipurackal, the First Rector and then under His Excellency Mar Joseph Pallikaparampil, the Second Rector. His spiritual director was very Rev. Msgr. Mathew Mankuzhikary, the well-known Spiritual guide.
His Excellency Mar Sebastian Vayalil, the first bishop of Palai, on January 5, 1972, ordained him a priest at St. Mary’s Church, Lalam Old, Palai. He had the privilege of receiving his First Holy Communion and Confirmation from the same bishop. His first assignment was at St. Joseph’s Church, Kudakkachira, under the veteran Vicar Very Rev. Fr. Joseph Alumkal. It was the year of 1972 known for its “College Strike”. His initial zeal enabled him to work hard. He was transferred to St. George Forane Church Aruvithura, in 1973. There he served as an assistant Vicar for four years under two experienced Vicars, Very Rev. Fr. Jacob Thazhathel, the Founder of the Congregation of the Daughters of St. Thomas and Very Rev. Fr. Jacob Gnavallil, an exemplary pastor. He was instrumental in starting the Georgian College of Aruvithura. He was appointed Vicar of St. John’s Church, Amparanirappel, in 1977 and there he served for more than three years.

It was at this time he completed his Bachelor’s degree in English literature. Then he was appointed as the professor at Good Shepherd Minor Seminary, Palai. Besides teaching, he had the duty of the Spiritual Director and Vice Rector of the Seminary. He served the diocese as Secretary to the Association of the Diocesan Clergy in Palai. Mar Joseph Pallikaparampil, Bishop of Palai, who was in charge of the Overseas Mission of the Syro-Malabar Church, sent him to Dallas, Texas, USA to serve the Syro-Malabar faithful in that region. He was the first Syro-Malabar priest officially appointed to begin a Syro-Malabar ministry in USA, in 1984.
Most Rev. Thomas Tschoepe, Bishop of Dallas, welcomed him and appointed him as assistant pastor at St. Pius X Catholic Church, Dallas, with Rev. Msgr. Thomas W. Weinzapfel being the pastor. Rev. Robert Crisp, Rev. Arthur Mallinson, Rev. Msgr. Joseph Erbrick and Rev. Dennis O’Brien, M.M. were the other priests who served at St. Pius X Church while he was there. He came to Dallas in 1984 and started the Syro-Malabar Mission and established the St. Thomas the Apostle Indian Catholic Church in 1992 in Garland for the Syro-Malabar faithful. He attended the University of Dallas and completed his Masters in Theology program in 1995. In 1997 he was transferred from St. Pius X Church, to St. Michael the Archangel Parish, Garland, as assistant pastor. Rev. James Sharp was the pastor. He purchased a house in Garland for the rectory for the St. Thomas the Apostle parish.

He took charge as the Director of the Mar Thoma Shleeha Syro-Malabar Mission in Chicago on July 1, 1999. The parish community was growing fast and various ministries were organized. He was a consultant of the Migration Committee of the United States Catholic Conference of Bishops (USCCB).

It was on March 13, 2001, the first Syro-Malabar Diocese outside India, namely, St. Thomas Syro-Malabar Catholic Diocese of Chicago was established and he was appointed the first Bishop of this newly formed diocese, by His Holiness, Pope John Paul II. His Episcopal ordination took place in Chicago on July 1, 2001, during the Second Syro-Malabar Convention. His Beatitude Mar Varkey Cardinal Vithayathil was the main celebrant of the Consecration ceremony; Mar Joseph Pallickaparaupil, Bishop of Palai, and Mar Kuriakose Kunnacherry, Bishop of Kottayam, were the co-consecrators. His Eminence Francis Cardinal George was the homilist during the Holy Qurbana. Mar Jacob Angadiath’s diocese is extended all through the USA and he is the Permanent Apostolic Visitator to Canada.